A Time to Hold Close and a Time to Let Go

A Time to Hold Close and a Time to Let Go

My daughter prepared me long in advance regarding her plans to move out of state for college. She was particularly drawn to the East Coast, but also liked a university on the West Coast — and we live in the middle of the United States. My first test of faith was when she embarked on a solo college tour of several universities on the East Coast the summer before her senior year. I had to trust I had taught her all she needed to know to be safe. More importantly, I had to trust God would protect her.

I prayed fervently through the college application process that God’s path would be clear to her. During the spring of her senior year, we both visited the West Coast school and the moment I stepped foot on the campus I felt God’s presence. While I did not share this with her at the time, I felt a sense of peace this was the place for her. When the chips all fell in place, God opened several doors, one to her dream school on the East Coast. He also clearly put a lock on this door. My mommy heart was tempted to call and plead for the finances to enable her to attend this school, but then I remembered my prayer to my Heavenly Father. He had answered the prayer but just in a different way. In the end, my girl headed west as God opened this door wide.

The summer leading up to her departure was busy and there seemed to be so many decisions to make. Honestly, there wasn’t much time to ponder or fret over the impending move. The times we did have together were such treasured moments for me, though I knew they would be few and far between when school started. The end of August came at lightning speed and she was off to start her new adventure.

Thinking of the special moments we spent leading up to this new change in our family, I have often thought of the stories of Mary and Jesus. The Bible mentions two occasions when Mary stopped and pondered on these treasured intimate moments that she shared with Jesus while he was growing up. “But Mary kept all these things in her heart and thought about them often.” (Luke 2:19)

All around Bethlehem, the word spread about the arrival of baby Jesus. The shepherds were visited by a heavenly host of angels singing about the special child in the manger. They couldn’t walk fast enough to get a glimpse at the swaddled promise of peace on Earth. Today, we might compare this moment to a video going viral on social media where everyone is all a flutter and can’t stop talking about the clip.

In the pandemonium, unlike the shepherds, Mary just relished the sweet moments holding this precious boy in her arms. I believe she sensed the time was fleeting; nonetheless, she held onto them in her heart as if time was still.

When Jesus was twelve, he accompanied his parents to Jerusalem for the Passover festival. As if cut out from a scene of Home Alone, his parents mistakenly thought he was in the caravan of travelers and they accidently left without him. Unlike the character in the movie who was afraid in his empty home, Jesus was very content sitting in the Temple soaking up all the information the religious teachers had to share with him. Mary and Joseph were beside themselves by the time they found him three days later.

“But why did you need to search?” Jesus asked. “Didn’t you know that I must be in my Father’s house? But they didn’t understand what he meant. Then he returned to Nazareth with them and was obedient to them. And his mother stored all these things in her heart.” (Luke 2:49-51)

While Jesus knew he belonged in the temple, it was not time for his ministry yet. I think Mary knew this as well and always took the opportunity to embrace her role in Jesus’ upbringing. Like Mary, I knew I would eventually have to release my girl into the world but continued to relish the special moments she was in my arms and under my roof.

Just like God tasked Mary and Joseph with the job of training up Jesus for his mission on Earth, we too are required to pour into our children’s lives with God’s word so they will be ready for His work. As hard as it is to cut the cord, we must trust God with our adult children’s lives. This requires us to be intentional in sharing the Bible with them and calling out to our Heavenly Father in prayer over them. We plant the seeds throughout their childhood and God will water them, causing them to sprout at the right time.

There is a time to treasure the moments of parenting, to hold onto our children for their safety, and there is a time God calls us to let them go. Releasing my embrace as we bid farewell last August was tough, but I knew in my heart this was God’s path for my daughter and he would equip her on this new journey. 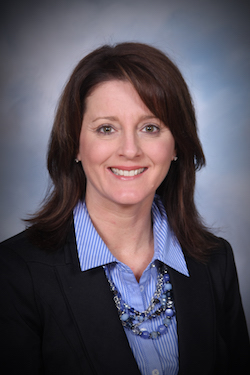