Register by August 15 to receive $10 off the online bookstore! - Rooted 2020 Micro Conferences

The Book of Ruth, Critical to God’s Narrative of Redemption

The Book of Ruth, Critical to God’s Narrative of Redemption

In my house, we are currently viewing and reading stories about love.

At the end of each day we settle down as a family to read together and the regular favorites are
selected – The Little Mermaid, Frozen, Sleeping Beauty, Rapunzel, and Beauty and the Beast.

The Old Testament offers a brilliantly constructed piece of literature that speaks of love over and over
and over again. The book of Ruth is packed with subtlety, with meaning at multiple levels, and is
written masterfully. Many consider it one of the finest literary stories of the Old Testament.

You may know this story well.

The story of Ruth opens with the author describing the situation of one particular family. Elimelech,
his wife Naomi, and their two sons leave Bethlehem and move to the region of Moab because of
famine. They are in search of food. While in Moab, Elimelech dies. The two sons take Moabite
women as wives, can’t produce children, and die young. This leaves Naomi and her daughters-in- law
(Ruth and Orpah). All three women are widows, and Naomi is in a foreign country. There is no
support for any of them.

After hearing that the famine in Bethlehem had ended, Naomi decides to go back home. She strongly
encourages Ruth and Orpah to go back to their families of origin in order to be cared for and to
prosper in life. Orpah turns back, but Ruth continues with Naomi. And for the rest of the story we are
told of how life turns out for Naomi and Ruth when they are back in Bethlehem.

I imagine in the work you do as a youth minister – the people you have conversations with, and the
crises you get called into – there are similarly tragic moments you’re involved in.

The student who loses her best friend to suicide and didn’t know she needed help. The young man in
high school whose father passes away suddenly. The family who is effected by a car accident, or by
cancer, or by an illicit liaison.

As youth ministers, we often have the privilege of being part of people’s lives at the worst of times.
And often we ourselves don’t know what to say or how to handle such events and experiences. But
we sit there, we listen, and we show our love and care for them.

The tragic experiences of Naomi and her family are shown to be part of God’s overall redemptive
plan for the world. In a matter of months, it seems, Ruth is married to a man named Boaz and the
family is restored economically and socially.

Ruth soon enough births a son who will be the grandfather of King David. And knowing the bible as
you do, I suspect you are aware that in only a matter of centuries another young woman, Mary, will
also birth a son in the exact same village. This son of Mary is part of this very family line and will be
known as the Son of God, redeemer of the world.

When the story of Ruth begins, no one sees this coming. But in retrospect, we see God’s sovereign
hand, his active care for his people, working through tragedy in order to bring triumph.

And we don’t want to be glib here either.

The actual pain and sadness is legitimate.

The events are to be lamented.

Yet, the result of this book isn’t just a romantic happy ending between Ruth and Boaz. Because of
their continued lineage, the book of Ruth is a critical part of the grandest narrative of all, a narrative
that leads to the happiest ending of all: Jesus dead and raised. And it portrays a picture of God’s
divine action through the ordinary lives and events of people. He is there working in our lives and he
is there working in the lives of others.

For us as youth ministers the question becomes, “Where are we seeing God at work?”

As Ruth commits to follow Naomi back to her home town of Bethlehem she says,

Whether we are dealing with tragic events and experiences, or simply trying to run the best youth
group night we can during the week, we want to commit ourselves to trusting God to work within it.
We can be sure that God is at work and that he is calling people to himself, providing hope for those
in crisis, showing his love to those we serve, and the great and capable author of the magnificent story
of redemption.

He Meant to Pass By Them: What is Our Hope in Suffering?

God’s Sovereignty and Your Family’s Suffering 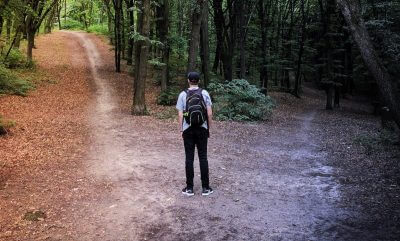 Youth Ministers: COVID-19 is an Opportunity for Your Students