Jesus and That Kid: The Woman at the Well

Jesus and That Kid: The Woman at the Well

The story of Jesus with the woman at the well in John 4 reveals a beautiful account of a broken, unredeemed, religious-but-unconverted sinner who God desires to engage with. Despite all that is working against her, the woman at the well is not without hope, and neither are the students in our ministries.  In this account, we find that Jesus initiates with her, He identifies with her and makes known her sin, and He invades her life with the truth, giving her “living water” that will allow her to “never be thirsty again” (John 4:14).

In the beginning of the story, we learn that Jesus is in Judea, but it is time for Him to move on to Galilee. As Jesus begins the journey to Galilee, John writes that He had to pass through Samaria (4:4).  Geographically, Jesus didn’t have to “pass through” Samaria, which was an area detested by the Jews; but, the need was based on God’s divinely appointed plan.

Tired from His travels, Jesus stops and sits at a well in Samaria.  A woman from Samaria comes to draw water and Jesus asks her for a drink.  On the surface, her coming to the well does not seem that unusual, but context is key; the text says she was there at the sixth hour, which is noon.  In that day, no woman would go out at noon to draw water for her family, unless she was a social outcast (Genesis 24:11; Genesis 29:7).  The Samaritan woman had come to the well when she knew she’d be alone.  Her life was messy.  She was probably known as “that woman” in her community.

Jesus initiates with a woman that any self–respecting religious man would have avoided, and He speaks truth into her life. He patiently explains to her, despite her confusion and lack of understanding of His words, that there is real, living water available to her – living water that provides eternal and everlasting fulfillment (4:13–15).

While Jesus initiates with the woman at the well, He is not interested in a mere conversation about well water.  He has every intention of identifying her deepest need for freedom and salvation that is only found in Him. To make the woman aware of her sin, Jesus speaks right to her heart (4:16). The woman attempts to hide her sin (4:17), but Jesus identifies and exposes it (4:17–18).  This woman, despite her relationships with six different men (five marriages and one live–in boyfriend) has a desperately thirsty soul.

Just as Jesus identified the sin in the life of the woman at the well, we are called to identify the sin in the lives of the young people in our ministries.  Week after week we interact with students who forsake the living waters in Christ for broken cisterns that can hold no water (Jeremiah 2:13).

Despite the woman’s attempts to take the focus off of her sin, Jesus points her right back to her need.  The Samaritan woman’s whole life had been built on the externals – how she looked, what she did, who she was with, and where she worshipped. But Jesus wasn’t concerned with what was on the outside. Rather, His concern was for her heart (Mark 7:15).

What this woman needed was not another man or a mountain–top worship experience. What she needed was for her life to be invaded by the Living God.  Like this woman, many of our students are focused on the externals of life and often deflect the attention from their sin. But Jesus is calling them to more.  Are we following His lead and pointing them to more?  Will we point them right back to their need for Jesus?

Our students will remain as outcasts – pursuing satisfaction in the externals, moralism, sexuality, body image, self–righteousness, vanity, status, and any other number of things – unless the Gospel of grace invades their lives.  The Samaritan woman remained an outcast until Jesus invaded her life with what she truly needed: living water. She then went from living shamefully as an outcast in the community to living boldly as a neighborhood evangelist (4:29; 4:39).

In our ministries, we constantly come into contact with the woman at the well: the outcast –  the student living in guilt and shame.  Whether internally or externally, they feel alone, hopeless, and bound to sin. But there is hope!  In His faithfulness, Jesus initiates with us, identifies and exposes our sin, and points us to God where the Gospel of grace invades our lives.  There is hope for the outcast – for us and for “that student.”  Be comforted and encouraged as we initiate, identify, and invade the lives of students. 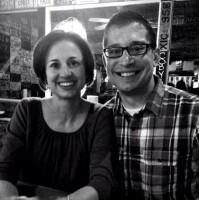 Darren DePaul is a graduate of Geneva College (B.A., History) and of Trinity School for Ministry (M. Div.). He has been in full-time ministry for nearly 20 years, and is the author of the chapter on discipleship for the book, “Gospel Centered Youth Ministry: A Practical Guide.” Darren has been married to his wife Jenny for 14 years, and they have two beautiful daughters. You can read more of his writings at darrenjdepaul.com