Secular Wisdom from the Movies: The Avengers

In this series, “Secular Wisdom from the Movies,” we hope to offer student leaders a resource – whether for summer programming or just regular teaching. So often we overlook biblical insight from the secular world. The movies in this series each offer a unique Gospel perspective that we can bring to our students. To read the last article in this series, click here.

I discovered The Avengers like everyone else did: it was everywhere. Back in the summer of 2012, you couldn’t go anywhere in the country without seeing some sort of promotional material related to the film. The Avengers quickly became a cultural touch-point that students, parents, and leaders all at least knew about (if not saw multiple times).

When preparing for a weekend confirmation retreat, one of our youth leaders noted the potential the movie had for a gospel message. When we showed The Avengers on the first night of the retreat, we were surprised by how many little things the students picked up on (as the movie related to Christianity), and how many big things were there, ripe for discussion.

There is much to glean from this global phenomenon for the Christian with a discerning eye: like the character Natasha Romanoff’s longing for redemption, to “wipe the red from her ledger;” the unification of very different people, with disparate gifts and talents, around one common goal; not to mention Tony Stark’s Christ-like sacrifice for the people of Manhattan (and the world). For a big-budget American blockbuster, the spiritual themes and lessons of The Avengers are many.

One scene in particular offers a fantastic lesson of the reality of gospel living. It can easily go unnoticed, though, because there is always tension when truth is on the lips of “the bad guy.”

Loki is the resident “bad guy” of the narrative. Norse god of mischief (and brother to one of our protagonists, Thor), Loki is on a mission to conquer earth as recompense for being second in line to the throne of Odin. About a third of the way through the movie, Loki makes a speech in the Stuttgart, Germany. People are fleeing the scene of his latest murder when he surrounds them and demands they to kneel before him. Once the masses comply, he delivers an address meant to intimidate his would-be subjects:

“Is not this simpler? Is this not your natural state? It’s the unspoken truth of humanity: that you crave subjugation. The bright lure of freedom diminishes your life’s joy in a mad scramble for power, for identity. You were made to be ruled. In the end, you will always kneel.”

Loki admits later that his whole ambition is to set himself as the superior ruler, and so our instinct as an audience is to react with anger and distrust. But is Loki wrong? He describes modern life as “a mad scramble for power, for identity” – a far too apt description for our American sensibilities. We tend to view freedom as the highest good, and so we seek anything and everything that will bring us a modicum of pleasure, freedom from our suffering.

Loki is right: our very identities are staked on this idea that we can be our own rulers, that we can make our own joy – an idea born all the way back in Eden. But this idea, played out, quickly becomes an overwhelming burden, and we find ourselves bowed at the knee to the false promises of the world.

Doubtless, some will truly believe it possible to find true joy in this pleasure, or that relationship, or this noble work, or that religious system, or this athletic endeavor, or that artistic pursuit. “I don’t need to kneel before any higher ideal, I can find my joy and identity in these things.”

In 2 Peter, the Apostle Peter would beg to differ: “For whatever overcomes a person, to that he is enslaved” (2:19). No matter what you choose as your pursuit, if it becomes the thing you build your life around, it has become your slave master. And because that thing offers hope and happiness, safety and significance, we find ourselves all too willing to kneel, even if the consequences are dire. No matter how much we resist the source, the words do ring true. “In the end, you will always kneel.”

And so, it seems, we are stuck with those in Stuttgart, kneeling to a madman because his words bear a powerful truth. We may kneel, but must we ultimately kneel to the tyrants of this world – lust, greed, power, and sin?

What if instead of bowing the knee to these things – instead of futilely striving to create our own freedom – we lay our identities at the foot of a larger ideal? What if we fell to our knees instead, helpless at the cross?

When all hope seems lost in Stuttgart, an elderly man slowly stands up in the back of the crowd and answers with an alternative: “Not to men like you.” Loki has twisted truth to his own ends and is not worthy of our kneeling obedience. Only if someone enters in and acts on their behalf can they be free. The crowd in Stuttgart is finally saved by a man coming down from on high, and shielding them from Loki’s attack, freeing them from his subjugation. Captain America, in this instance, is but a shadow of the God-man who came and took the blows of death to set us free from our slavery to sin.

But we must still kneel before something. The temptation would be to do as the crowd here does and go about our merry way, thinking that because we’ve been freed from one tyrant, another will not take his place. After all, as the old man suggested, there are always men like Loki.

We want our students to find freedom in Christ, but what value does it have if they just get locked up by the next flashy thing? They may find freedom from some sort of addictive behavior, only to fall subject to a new one (isn’t this a trap we’re all familiar with?). Or maybe our students find freedom from a poor self-image, only to see pride swoop into command. It could be they are freed from an obsession with status, and then become obsessed with telling others how they should too should change. Perhaps our youth are freed from doing all these things they know they shouldn’t, only to be enslaved by a legalistic compulsion to do all the things they figure they “ought.”

In any case, freedom has now turned back to slavery.

Instead, we all need to know our only hope is to turn our allegiance to Him who won our freedom once and for all.

For when you were slaves of sin, you were free in regard to righteousness. But what fruit were you getting at that time from the things of which you are now ashamed? For the end of those things is death. But now that you have been set free from sin and have become slaves of God, the fruit you get leads to sanctification and its end, eternal life. For the wages of sin is death, but the free gift of God is eternal life in Christ Jesus our Lord (Romans 6:20-23).

This is the message we tried to impart to our students at their confirmation retreat. Every day, we have the choice of who we will kneel to: men like Loki, the avatar for power and greed, or a Savior who offers us immeasurable love and absolute freedom from sin and death. One day we shall all, either as rebels or servants, bow at the feet of Christ, the only one worthy of our kneeling (Philippians 2:9-11). 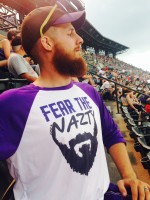 Adam has been working with students since his days at the University of Colorado, where he earned his bachelor’s degree in civil engineering. But the Lord promptly called him instead into the wonderful world of youth ministry. He and his wife Sharayah enjoy Rockies baseball, English soccer, and enjoying all the Memphis has to offer.