This is How We Overcome: A Call to Justice, Mercy, and Humility

Our nation is reeling in the aftermath of the shooting deaths of two African American men at the hands of police, and subsequent sniper attacks by black men that killed at least eight white police officers in a matter of days. In the wake of tragedy with racial tensions at a fevered pitch, our children and youth seek to make sense of it all in a media-saturated culture. Meanwhile, the world is watching to see how we as Christians – white and black – will respond.

In 2013, my husband and I moved to a low-income, mostly African-American neighborhood on the South Side of Chicago to be part of a multi-ethnic church plant. Within our first few months there, a six-month old baby girl was killed by five bullets. These bullets were intended for her father as he changed her diaper in a parked car a few blocks away from our apartment. The father and child were African American and this little girl was tragically one of many young victims of gang-related violence in our neighborhood. Suddenly, this murder of a black child (which sadly, rarely even makes national news), was personal. This baby girl was the same age as my daughter. She lived just a few blocks away and was shot in broad daylight in an area where I frequently pushed a stroller that carried my baby and toddler.

Although this tragedy is vastly different from police shootings and attacks on law enforcement, I mention it because it reminds me that evil is rampant; we are all sinners who are hell-bent on protecting our own self-interests and desperately in need of God’s grace. The fact that our country is still largely segregated with racially homogenous neighborhoods and churches, and racially fragmented public schools, perpetuates the “us versus them” mentality and makes it difficult for us to empathize. The story of the Good Samaritan (Luke 10:25-37) illustrates our tendency to avoid entering into the suffering of another by rolling up our sleeves to tend to a bloody wound, whether physical or emotional, especially when it involves crossing racial, ethnic and religious barriers. When we recognize that we are all sinners and can do nothing to escape suffering, we are better able to “bear one another’s burdens and so fulfill the law of Christ” (Galatians 6:2).

As a white person, I can choose to disassociate from the pain of my African-American brothers and sisters by denying that I have any part in what is happening. I can stay within my protective bumble of perceived security and avoid the discomfort of confrontation and the unpleasantness of discussing racial disparities or even admitting they exist. Despite my past experiences living in predominately low-income, black neighborhoods, my skin tone and middle-class lifestyle provide a buffer from dealing with the injustices my black brothers and sisters face on a daily basis. Since I speak from the perspective of a white person, I want to challenge fellow white Christians. Will our response be to hunker down in our mostly segregated churches and raise the walls of hostility higher to protect ourselves? Or will we look to our Savior as the model for unconditional love, grace, and humility – the Ultimate Reconciler?

Micah 6:8 points us to a clear answer on how the Lord wants us to respond: “Act justly, love mercy and walk humbly with your God.”

The Bible clearly affirms that all people are created in the image of God and that there is no distinction based on race, color or creed. Paul reminds us, “There is neither Jew nor Greek, there is neither slave nor free, there is no male and female, for you are all one in Christ Jesus” (Galatians 3:28). This does not mean that we should be colorblind, as if that were even possible, but that we are to celebrate our diversity and love one another as equals.

Even though we may outwardly agree with this, we must honestly ask ourselves if we value other races and ethnicities as we do our own. This does not come naturally, for any of us. We must ask God to change our hearts so that we can show mercy and empathy to those whose skin color, culture, and life experience may be vastly different from ours.

According to the F.B.I. Supplementary Homicide Report, African Americans are proportionately two-and-a-half times more likely than whites to be killed by police. A 2015 article in the New York Times poses the question of whether these statistics point to racial bias among police or explain just one aspect of an intricate web of social factors that confirm a strong correlation between poverty and race. To borrow a quote from the article: Jens Ludwig, an economist at the University of Chicago who also directs its Crime Lab, explains, “Living in a high-poverty neighborhood increases risk of violent-crime involvement, and in the most poor neighborhoods of the country, full four out of five residents are black or Hispanic.”

What underlies the connections between race, crime, and poverty is both a broken system and generations of broken families. Although civil rights achievements have had a profoundly positive impact on African Americans and society as a whole, those trapped in poverty often still perceive the heavy policing of their neighborhoods as an attempt to keep them down.

When we were living in Chicago, my husband and I got to know a group of African-American teenage boys who were close friends with a shared passion for skateboarding. One young man (who also played the drums in the worship band my husband led) would spend much of his free time perfecting his skateboarding tricks with his buddies around the city. Although he was a good kid who had big plans for his future and rarely got into trouble, he felt harassed by the police. On more than one occasion, he and his friends were approached by police officers, questioned and even forced to put their hands against a police car to be frisked, even though they were only skateboarding. He and his sister who were both involved in the youth group at our church complained about being followed by cops walking home, and felt more threatened than protected by this police presence. Again, this is a black teenage boy who fled the rampant gang-activity in his neighborhood, made good grades, plans to attend college and has several adult mentors in his life.

I must be clear that there is absolutely no justification for any type of violent retribution on police, least of all murder, and we need to do more to support police in building relationships with the communities they serve. Although I have been approached by police officers in different cities and neighborhoods for being white in the “wrong” part of town, I am also extremely grateful to police officers who put their lives on the line daily to protect all of us. Although I often heard about contentious encounters with police, another police unit in Chicago kindly volunteered to lead a self-defense course for women in our neighborhood – at no charge. There are many other examples I could cite of law enforcement going over and beyond the call of duty to protect and build bridges in impoverished communities.

While Jesus commands us to love everyone, he was particularly concerned about the unity of his body, the church. The writer of Hebrews urges the church in the midst of persecution to not only “endure a hard struggle with sufferings” for the sake of the Gospel, but to be “partners with those so treated.” In case we need an example of what this brotherhood demands, he goes on to explain what this bond of love looks like in practice: “For you had compassion on those in prison, and you joyfully accepted the plundering of your property…” (Hebrews 10:32 -34). The very least we should do is ask our African-American brothers and sisters (and other marginalized groups) how they feel about what has happened, and listen. Our lives, after all, are inextricably linked by our adoption into the beloved family of God.

As members of Christ’s body we are mutually dependent. Therefore, when one is hurting, all feel the pain and must work together to bind up the wound. “Weep with those who weep,” Paul charges. “Mourn with those who mourn” (Romans 12:15). These exhortations are the heart of empathy.

According to ground-breaking research conducted by social scientist and speaker Brené Brown, empathy conveys “me too,” whereas sympathy communicates “not me.” She says, “Empathy is the antidote to shame and it is the heart of connection.” At the heart of shame is the belief that “I am not enough.” Our response to others when they are hurting has the power to either bring healing or reinforce shame. Rather than feeling sad from a safe distance about what African Americans are experiencing, we are called to demonstrate compassion. When we fail to show empathy, we are guilty of heaping salt on the wound.

The Bible says, “God opposes the proud, but gives grace to the humble.” For both whites and blacks, it may be tempting to place blame and make excuses to try to justify our anger and defend ourselves. But this response only stirs up strife and sends us into opposing corners, ready for the next bare-knuckle brawl. For whites, keeping silent also sends the wrong message. Our words should be few and carefully chosen. We would all do well to pray more and talk less when it comes to race relations. Jesus prayed to the Father before willingly being led to the cross that “they may be one even as we are one” (John 17:11). Surely He who has born all of our sorrows, sin, and shame on the cross longs to hear us ask Him to reconcile us to one another.

Perhaps what matters most is not how we respond when our Facebook feed is filled with stories of high-profile shootings and when 140-character comments smack of self-righteous fervor, but what happens when the tidal wave of “newsworthy” tragedy passes and the fury and fear subside?

As citizens of a fallen world in which evil and suffering are seemingly on the rise, Paul admonishes us as he did the early Christians: “Do not be overcome by evil, but overcome evil with good” (Romans 12:21). This means that we are to respond to evil differently, because we know that Christ has overcome evil by the power of His death on the cross and resurrection. But, “take heart” Jesus says, “I have overcome the world.” And one day every tribe, tongue and nation will worship him with one voice singing we HAVE overcome…for those who have washed their robes in the blood of Jesus Christ have been redeemed as His children for all eternity. Beloved, let us love one another. 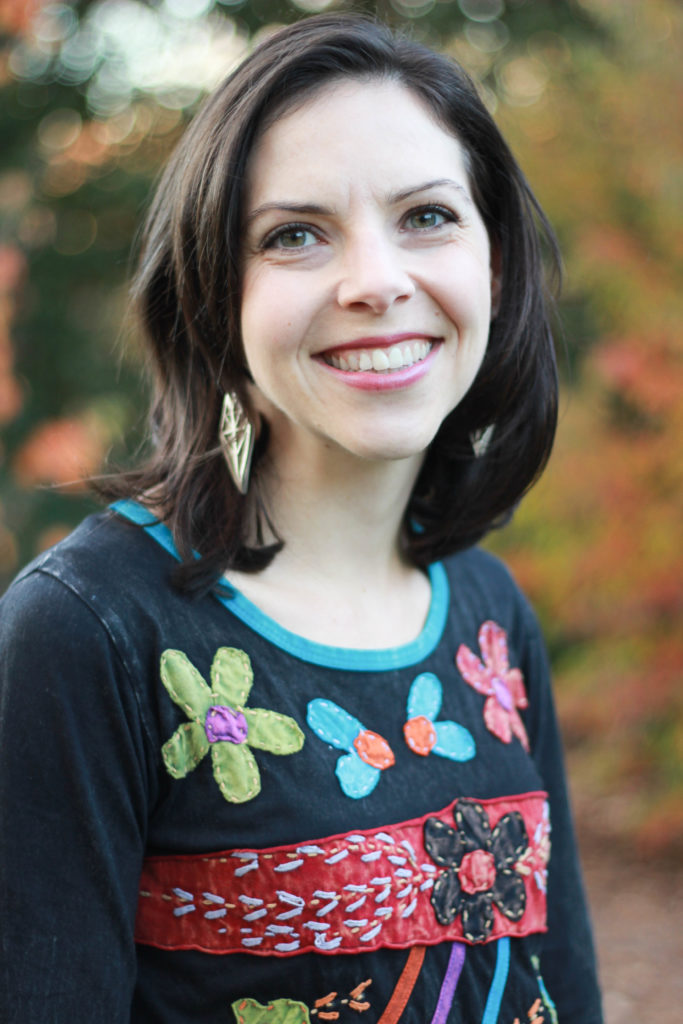 Melissa Huff has spent many years working with churches and nonprofits to promote social justice and racial reconciliation in Birmingham, Alabama and Chicago, Illinois. Melissa earned her Master’s in Social Sciences with emphasis in urban sociology from University of Chicago. She currently lives in Greenville, SC with her husband Jeremy and their two daughters, Amelia and Lillian, where she directs a program aimed at improving educational opportunities for underserved youth.